Cycle Out Cancer with Spectronics

You are here:
The Cycle for Survival event at Equinox on Saturday March 5th was a major success.
The Spectronics team surpassed their fundraising goal, raising a total of over $4,300 so far!
Within six months, all of the money raised will go directly into the lab at Memorial Sloan Kettering Cancer Center, the world’s oldest and largest private cancer center. It will help fund groundbreaking research and treatment for rare cancers, such as brain, pancreatic, ovarian, all pediatric cancers and many more. 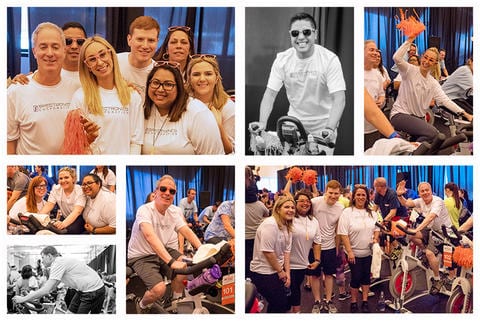 About Cycle for Survival
Cycle for Survival is the national movement to beat rare cancers. Our high-energy indoor team cycling events provide a tangible way for you to fight back—100% of all money raised directly funds lifesaving rare cancer research.
Half of all cancer patients are fighting a rare cancer.
According to the National Institutes of Health (NIH), a “rare cancer” is one with a prevalence of fewer than 200,000 affected individuals in the United States. But when you put all of these rare cancer types together, they account for approximately half of all cancer diagnoses. Research on many rare cancers is drastically underfunded, often leaving patients with limited or no treatment options. Memorial Sloan Kettering Cancer Center—the world’s oldest and largest private cancer center—is committed to changing that reality. MSK’s close collaboration between doctors and researchers is a unique strength: new drugs and therapies developed in the lab can be moved quickly to patients’ bedsides.