Where to Buy   Careers

In What Sort of Applications Can UV Light Be Used? 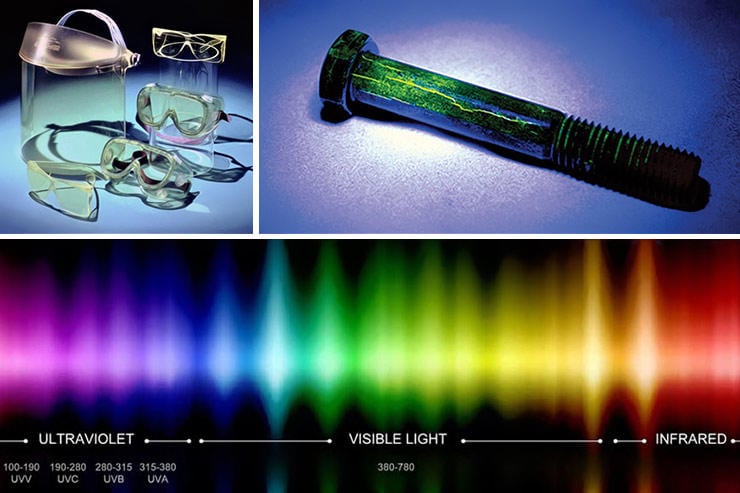 Ultraviolet (UV) light is all around us, all the time. Although it is invisible to the human eye, it is found outdoors in the sunlight, and indoors too. Even the fluorescent lamps at your office or school emit some ultraviolet light! In very small doses, UV radiation is safe. However, in large doses, eye and skin damage can occur.

Utilizing a higher intensity UV light is extremely useful to spot fluorescence in many different substances. Fluorescence is luminescence (light shining without a heat source) in which light of a visible color is emitted from a given material under stimulation by light or another form of electromagnetic radiation – such as a Spectroline® UV lamp.

FUN FACT! Fluorescence is named after a rock! The British scientist Sir George G. Stokes, named the phenomenon after fluorite, a strongly fluorescent mineral. Stokes is credited with discovering that fluorescence can be induced in certain substances by stimulation with ultraviolet light.

UV light is used in countless applications every day, from laboratories and doctor’s offices, to forensic crime scene investigations, to nondestructive evaluations of critical infrastructure.

Here is a short list of some of the MANY specialty applications that UV light is used in:

ARSON INVESTIGATION
Fire inspectors can actually see residual accelerant that has not been consumed by fire. Under UV light, carbon residues from chemical fuels on walls, floors, furniture and carpeting becomes instantly visible.

ARTWORK INSPECTION
Ultraviolet light reacts differently with various types of materials. With UV light, collectors can protect themselves against art fraud. UV light can be used to detect repairs in art, furniture, and other collectables, such as marble, ivory, porcelain and textiles. UV light can also detect the age of stone (marble will fluoresce as a vivid purple if it was recently carved, as opposed to a muddled white if is aged).

BEAUTY AND SKINCARE
Ultraviolet light therapy can treat a variety of skin problems, such as Psoriasis, Eczema, Vitiligo (a loss of skin pigment that often appears as white blotches on the skin), persistent itching, and other problems. UV light therapy is usually offered at a medical clinic, but can also be found at beauty spas, administered by licensed professionals.

DOCUMENT VERIFICATION
Driver’s licenses, passports, credit cards and many other official documents that have invisible fluorescent markings become visible and can be quickly and easily verified under UV light by a security professional.

ENVIRONMENTAL INVESTIGATIONS
Illegal dumping of chemical waste is a dangerous problem. UV light can assist in environmental investigations by indicating the presence of hydrocarbons (chief components of petroleum and natural gas), whether on the land or even in water. For other substances, trace dyes can be used along with UV light; some radioactive substances fluoresce as well.

GEM AND MINERAL INSPECTION
The fluorescence of gems and gemstones is a result of UV radiation absorbed by the impurities or structural flaws of the stones. Ultraviolet fluorescence is used by gemologists, jewelers and collectors to authenticate gemstones, or to determine if the gemstone has been heat-treated.

NONDESTRUCTIVE TESTING
Spectroline offers an array of powerful, versatile fluorescent inspection lights, including convenient flashlight style, hand held versions, and wide-beam flood lamps. These lamps are shone on surfaces that have been previously treated with a liquid penetrant or magnetic particle, which will fluoresce under ultraviolet light, exposing any flaws in the material being examined. Nondestructive testing and examination is used in aviation, the oil and gas industry, mining, welding, fabrication shops, and the military to inspect all critical infrastructure.

PEST CONTROL / FOOD and AGRICULTURE
To determine rodent presence, inspectors illuminate the area in question with a UV longwave lamp. Rodent urine and hair glows blue-white and is easily identified on sacks of food or intermixed with food grains. Additionally, mold on certain grains also fluoresces.

So, the next time you visit an art museum, examine an antique item, buy a bag of flour, or window shop at the jewelry store – you can remember that these items were more than likely inspected with a UV light source! You can thank UV light for keeping you safe and sound, solving crimes and inspecting critical structures.